Lincoln is a city steeped deeply in history, but are you aware of its past in ironstone mining? Archaeological evidence dates early occupation to around the first century BC, with remains of wooden housing and domestic pottery found to the east of Brayford Pool. Since then the population has grown and the city expanded as a popular place to live with the cathedral, for centuries the tallest building in the world, one of the main draws. But employment forms part of its impressive heritage, with mining playing a surprisingly prominent role.

Lincoln hit its peak during the Industrial Revolution as an engineering city. Eventually, it became renowned for its contributions to the war effort, building  aircraft and tanks.

However, it was not just engineering that the city would become famous for. It sits above extensive and rich ironstone formations,  a sedimentary rock containing a high enough proportion of iron to be commercially profitable for the production of raw iron after processing and smelting. Ironstone was the prime resource for the iron manufacturing for many years until a purer form became available, making the industry obsolete.

The village (now suburb) of Greetwell lies just to the east of the main city and played host to one of the longest operational ironstone mines in UK history, commencing from the mid-to-late 1800s up to the middle of the 1900s.

It is estimated that in excess of 5 million tons of ironstone ore was raised from the Greetwell mines, the majority of this deriving from the subsurface expansion of pillar and stall workings, aided also by earlier surface quarrying and opencast mining operations. When demand for the material grew, adits were driven into the faces of existing quarries. In the case of one mine, which would end up being known as Wilsons Mine, an adit was driven before a large network of subsurface pillar and stall workings were expanded outwards, eventually creating an underground tunnel footprint spanning about a  quarter of a square mile.

The Perils of Pillar and Stall

In the first phase of pillar and stall mining, tunnels are driven into the ore bed in a rectangular pattern resembling city streets. Pillars are left between tunnels to support the weight of the overlying roof of the mine. The initial phase is known as “mining on the advance,” from the entrance toward the further reaches of the mineral reserve.

Occasionally, during a second phase, once advanced mining has been completed, pillars are removed “on the retreat.” Removing or “pulling” pillars begins far from the entrance and proceeds toward the entrance. As the pillars are removed, the mine can collapse because nothing remains to support the roof and overburden. Removing pillars causes stresses within the mine to shift and must be planned and executed carefully to reduce danger to miners and control the amount of stress exerted on remaining pillars and the mine floor. This is the case in Wilson’s Mine. Once the miners had removed the available ore deposits, the pillars were pulled allowing the mine roof to fall.

Below is an example of a mine plan held by the BGS which shows the extent of the underground mining of Wilsons Mine, as well as the earlier opencast workings to the north. 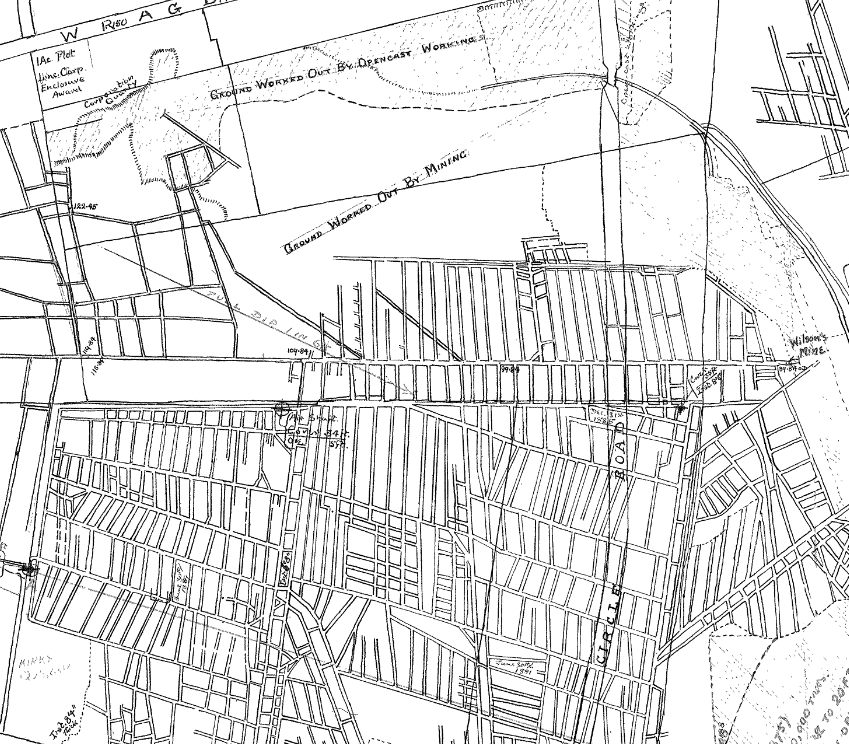 Development Above the Mines

For the most part, the ground above Wilsons Mine has been developed into commercial units and open greenspaces. This is quite a common practice for those areas potentially impacted by historical mining activity, especially when the later, subsurface mining extent is well documented.

Decisions can be made on the potential land use, as commercial use or recreational facilities are often favoured, over residential housing. This in itself holds its own issues, as the commercial properties above these now abandoned workings are not exempt from potential risk. Some of these units include businesses like car showrooms, where high value items are stored.

On the other side however, there are some residential houses within the area of the Greetwell mines, whilst some are built with workings close to their boundaries, others are located directly above them. An example can be seen here of the proximity of these workings in relation to residential housing. In both instances there is a potential risk to the property from these workings. When a property is underlain by recorded underground ironstone workings, or lies within the potential zone of influence of them (this is sometimes referred to as a ZOI and denotes the potential area at surface that may be at risk from settlement and subsidence effects should movement occur within the workings). There is an ongoing risk from these workings to the property.

The above extract of an Avista Residential Report in Greetwell clearly shows an area of housing that could be potentially affected by the former ironstone mines. Using our detailed historical archive, our expert geologists can investigate potential risks further based on a detailed study of the pillar and stall configuration, associated adits and worked depth to indicate the potential for subsidence.

When our mining consultancy team assesses there to be a potential risk to a property from such workings, a visual inspection by a qualified surveyor may be recommended.

On occasion if bed workings are recorded at a shallow depth, then this may suggest a higher level of risk, as such the recommendations may include more intrusive investigations. However it is important to note that there are multiple factors to consider when making this judgement, these are considered carefully by our consultants on an individual property basis.

For those properties of recent construction, it is possible that a suitable pre-construction site investigation to clarify any mining risk may have already been undertaken and in many cases, details of these works can be found via the Local Authority.

Climate Change and Past Mine Workings

Former mine workings could make themselves increasingly known as our climate continues to change. Conveyancers are used to ordering CON29M searches for coal mining areas but they do so not necessarily thinking about climate change. These tunnels are often very deep and established, whereas many of the other minerals like ironstone, chalk and limestone across the country can be very informal and worked close to the surface.

It could cause two potential effects. Subsidence could accelerate 8-fold from its current levels in the next 30-50 years. This could undermine shallower workings and adits that criss-cross underneath places like Greetwell.

Medium projections also suggest a 20-25% increase in rainfall nationally. Elevated surface (pluvial) flooding could erode thinner topsoils or spoil above adits which could accelerate their demise and lead to subsidence and potential collapse.

Our Avista environmental reports provide the most comprehensive view of past mining activity from both coal with a fully inclusive CON29M, together with reporting on more than 60 other minerals, including ironstone, which are not typically covered in a traditional coal mining search.

Not only that, but in addition to contaminated land, planning and infrastructure searches (essential for rapidly changing urban areas), Avista also looks into the future thanks to our unique ClimateIndex™ analysis module. This looks at the potential forward impact of climate change on a property-specific basis for a 1-, 5- and 30-year period. This helps your client understand the risks from flooding, subsidence and coastal erosion now, for a typical mortgage term and for within most re-sale periods.

It also enables your practice to be compliance-ready with future changes to guidance on advising clients about climate change from lenders and legal associations.