In the second of our two part blog on where the future lies for UK Energy policy, what resources will drive it and how this could impact our communities, we look at the role that existing fossil fuels continue to play, despite numerous pledges to reduce their consumption. Yet global geopolitics and spiralling imported energy costs are focusing minds and perhaps changing the game again.

The balance between access, affordability and security of energy supply is often coined ‘The Energy Trilemma’. Each of the three components in the energy system is required to be managed and balanced to reach a secure energy system. We are progressively reliant on more scarce resources, which has fueled the increased cost of energy. Consequently, the  system requires new resources while at the same time de-carbonising and modernising the ageing infrastructure.

One way of increasing energy security is by exploring methods to expand and diversify supply including overseas sources to supplement domestic supply. With the war in Ukraine, reduced supply of Russian oil and gas is placing a huge strain on global markets. The UK is relatively shielded from this compared to other EU countries (just 5% of total energy supply), but we need to grow our domestic resilience to compensate and to weather other geopolitical storms, especially now we are out of the EU.

In the UK, the established sources are carbon-intensive with a history of coal dating back approximately 500 years and oil and gas for over 150 years. Currently, approximately half our demand for gas is met through domestic supply.  This is achieved by 120 onshore oil and gas sites producing up to 25,000 barrels of oil equivalent a day.   To lose this capacity would be a major system shock and therefore, oilfields across the UK are likely to play a continuing role in the UK energy supply mix.

Although UK renewable energy sources are expanding fast – sixth in the world, according to IRENA – new sources of domestic fossil fuel supply are also being considered.

One method of producing natural gas, oil and geothermal energy is Hydraulic Fracking, or ‘Fracking’.  This process involves drilling through layers of bedrock until the well has reached the shale formation. Shale rock is naturally porous and therefore contains lots of pockets of natural gas. A highly pressured mixture of water, sand and chemicals is injected through the well causing the surrounding shale rocks to fracture and release gas, which can be collected. Burning the shale gas collected releases greenhouse gases. Therefore, many see exploring fracking as incompatible with government climate targets.

Additionally, fracking requires large quantities of chemicals that have been linked to environmental degradation. In the USA, several studies have found the fluid used in fracking to cause issues of water supply contamination, and consequently public health concerns. This is particularly worrying for the many rural communities which rely upon principal aquifers for their water supply. There are concerns that these issues could be replicated within the UK, adding further difficulties to water shortages and increasing pressure on the environmental and public health systems.

Furthermore, there is evidence that fracking can cause minor earthquakes.  In Lancashire, 58 earthquakes were linked to the injection of fracking fluid at a nearby fracking well in 2011. The Oil and Gas Authority found it was not possible with current technology to accurately predict the probability or magnitude of earthquakes linked to hydraulic fracturing operations.

Due to these concerns in November 2019, a temporary moratorium was put in place, pausing fracking operations in the UK. The government stated that fracking would require scientific proof that it was safe, sustainable and causes minimal disruption to the surrounding neighbours to continue.

However, the recent energy crisis has caused a revival of interest in fracking. The government has recently commissioned the British Geological Survey (BGS) to conduct an impartial technical review of shale gas.  With the government’s position of being ‘open-minded’ about onshore reserves added to the pressure of rising costs, we could potentially see shale gas enter the UK energy supply mix in the future.

Furthermore, earlier this year, despite fierce opposition the application to frack and explore the gas reserves in Surrey was approved by the government. Although the government was aware of the ‘significant level of landscape and visual impacts from the proposal’ on the surrounding landscape and that it would ‘degrade the quality of the setting of the AONB’ the need for more energy resources has seemed to outweigh these concerns.

The four main areas of the UK likely to be viable for shale gas exploration are: 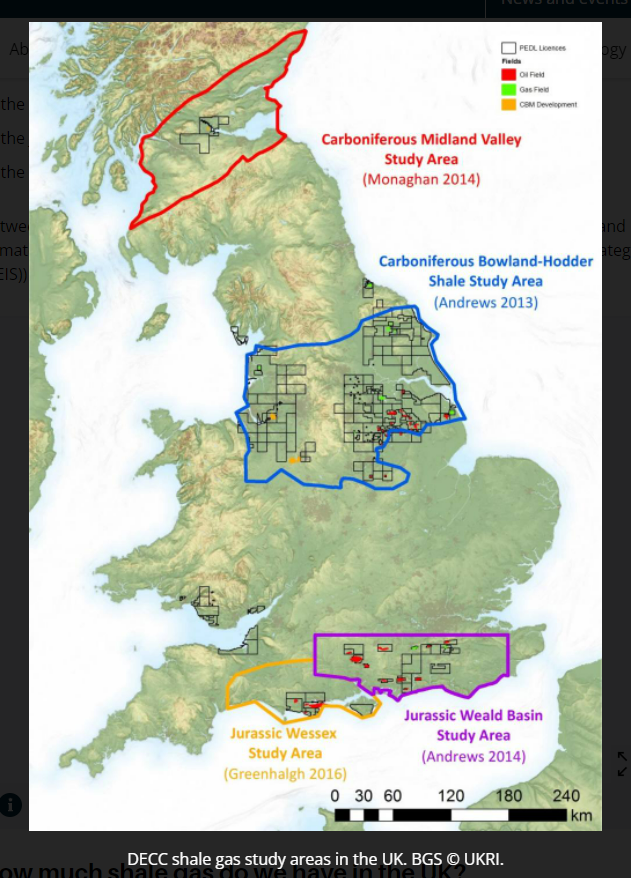 The unthinkable is also being considered:  coal is the most carbon-intensive fossil fuel that releases large quantities of greenhouse gases when burnt, contributing to climate change and degrading air quality.

Surface coal mining destroys vast amounts of natural environments and can cause landslides and subsidence. Alternatively, underground mining causes less surface environmental damage, however, large quantities of toxic residue are produced, which can be linked to water pollution.

Despite environmental concerns, a new coal mine in West Cumbria is currently being debated. Although the coal extracted is earmarked to support the UK steel industry, in part for wind turbine production, approving a new mine opens minds to future coal exploration in the UK including the reopening of former workings, such as Aberpergwm in Wales. Both are political dynamite and fly in the face of agreed UK climate policy and the drive for net zero by 2050 – hence why there are legal challenges and delays on decisions.

Additionally, with the cost of energy increasing,  the UK government is delaying the closure of coal-fired power stations. Therefore it is possible that new onshore fuel resources will continue to be explored and extracted soon.

Energy Security…but not near me, please?

There is uncertainty regarding the impact energy production sites have on nearby properties’ value and occupiers’ enjoyment. However, the research regarding the current oil sites indicates that property prices remain unaffected.

For example, a celebrity mansion hotspot is the residents of Sandbanks in Poole, Dorset. The neighbourhood is one of the most expensive places to live in the UK, despite its proximity to onshore gas production at the Wessex Basin Wytch Farm field. This is a traditional oil field that has been operational since 1979 and has become part of the landscape. Whether new fracking shale gas oil fields would be similarly well received is yet to be tested, however, the level of public reaction suggests it will be controversial.

As we feel our way through another change in government leadership and a summer of record temperatures, it has been noticeable how silent the leadership campaign has been on the climate crisis. One wonders whether a balance is being struck in MPs’ minds to calculate the impact of fossil fuel expansion in their constituencies, with the cost of living and energy crisis that their voters are facing right now.

Homebuyers can make their own judgments and this is possible by accessing the energy and infrastructure data contained in our Avista report. Combining ten environmental searches and our unique ClimateIndex™ forward climate risk modelling, it provides all the answers your client needs on the potential for energy production and expansion in the proximity of their property. This includes exploration licence areas for oil, gas and fracking.

For more information about our Avista report call us on 01273 257 755 or email us at info@groundsure.com.